Kaegi co-produces works with Helgard Haug and Daniel Wetzel, under the label “Rimini Protokoll”. Using research, public auditions and conceptual processes, they give voice to ‘experts’ who are not trained actors but have something to tell. Recent works include the multi-player-video-piece “Situation Rooms”, 100% São Paulo with 100 local citizens on stage and the “World Climate Conference” – a simulation of the UN-conference for 650 spectators in Schauspielhaus Hamburg.  The CCCBarcelona recently showed their eco-installation “Win < > win” and is currently producing their immersive installation “Urban Nature.” Their “Utopolis” for 48 portable loudspeakers opened in Manchester Festival.

Stefan Kaegi is based in Berlin, produces documentary theatre plays and works in public space in a diverse variety of collaborative partnerships. Kaegi has toured across Europe and Asia with two Bulgarian lorry drivers and a truck which was converted into a mobile audience room (“Cargo Sofia”). He has adapted “Remote X” an audiotour for 50 headphones to dozens of cities from Taipei to Santiago de Chile, and toured the interactive installation “Nachlass” that portrays people who have not much time to live. As well as “Uncanny Valley” – a monologue for a humanoid robot – and “Temple du présent.” A Solo for a live octopus on stage. 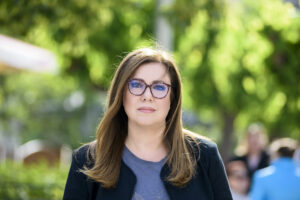 is an Assistant Professor of Theater, Performance Studies at New York University Abu Dhabi and an independent curator of performing and visual arts. She holds a Ph.D. in Art History (Panthéon-Sorbonne), a BA in Classical Studies, and a BA and MA in Theater (Athens University). Her essays on socially engaged art, public works, and interdisciplinary forms of historical representation have appeared in French, English, Spanish, Arabic, and Greek in critical anthologies and peer-reviewed journals such as Theatre Research International, Contemporary Theatre Review, and Performance Research. Prof. Arfara is a Fulbright fellow, a DAAD and Clemens Heller scholar, and a member of the IFTR’s Intermediality working group and the International Committee for Museums and Collections of Modern Art (CIMAM). She has also served as a member of the Prize Council for the Vera List Centre Prize for Art and Politics at The New School (2016-2018). In summer 2019, she was a Visiting Research Fellow at the Seeger Center for Hellenic Studies at Princeton University. She has lectured extensively in France and Greece. As the Theater and Dance Artistic Director and Curator of the Onassis Stegi in Athens (2009-2019), she initiated and curated numerous discursive events and international festivals at the intersection of art, science, and civic practice such as the research-based Fast Forward Festival. Prof. Arfara is the author of the book Théâtralités contemporaines (2011), the editor of “Scènes en transition-Balkans et Grèce” for Théâtre/Public (2016), and the co-editor of Intermedial Performance and Politics in the Public Sphere (2018).